Christian Hedonism, The Gospel in Classical Literature, The Idiot Dostoevsky 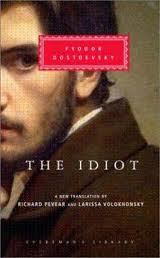 “Exactly as is a mother’s joy when her baby smiles for the first time into her eyes, so is God’s joy when one of His children turns and prays to Him for the first time, with all his heart!’ This is what that poor woman said to me, almost word for word; and such a deep, refined, truly religious thought it was—a thought in which the whole essence of Christianity was expressed in one flash—that is, the recognition of God as our Father, and of God’s joy in men as His own children, which is the chief idea of Christ.”

Prince Lev Nikolayevich Myshkin (aka, “The Idiot”), the protagonist in Fyodor Dostoevsky’s, The Idiot, (quote is from the Kindle version).

I just finished reading this work for the first time. Dostoevsky’s portrayal of the Gospel – through a character who sees all people for who they are, loves them regardless of their faults (covering all Ten of the Commandments), takes all faults of others upon himself, is labeled an “idiot” even though he clearly is not, and then is found innocent of all wrongdoing except loving too much – is incredible. It was well worth the time invested in reading it. Thank you Timanda Wertz and Jon Beall for pointing me toward this book, and Timanda for enticing me to read the book with this quote from another version of the text. The quote is found on page 213 of my Bantam Classic edition (1983).

The Gospel in Dostoevsky