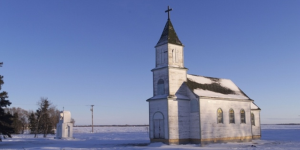 Friends at christianity.com have posted my, “When You Sense Your Church is Dying.” Here is an excerpt:

One of the most wonderful experiences believers can share is being part of a strong, growing church. What a joy it is to share in a congregation that has unity, love, holiness, a sense of the Spirit in worship, Christ-centered preaching, God-fearing leaders, members of all age groups and ministries towards all members, and a passion for reaching the lost. In contrast, it is burdensome to be part of a dying congregation: Worship is mundane, large age group segments are absent, there is strife among members and coldness toward visitors, and there is no purposeful preaching of the gospel to the lost or the baptized.

Having been part of both thriving and dying churches, I have witnessed believers make choices that have either blessed or harmed the recovery of their congregations. Here are some humble suggestions on how to live godly when you are facing a dying church.

My true concern is that we do not think long and hard about the Gospel when church becomes uncomfortable to us. Instead, we simply look for greener grass, not thinking about the possible ways the Lord can use us to be part of his work to sanctify his Bride, which includes one’s own, individual sanctification.

Recently I spoke with three young adult believers between 25 and 35 years of age,  each from different congregations, about staying in their churches of aging membership(s) and/or mediocre preaching and/or traditional corporate worship style(s). I appealed to them to consider the growth in their lives that could come from learning to endure and serve in imperfect settings. I attempted to explain that the substance of worship music is more important than the style, and that much could be learned from less contemporary styles. I spoke with urgency about the need to see the value of continuing in one place for a long time in order to see disciples formed and in order to maintain relationships saturated in the love of Christ. I wished for them to gather with other members in their churches to pray for the hearts of their older congregants, pastors, and leaders to be open to changes that would glorify the Lord and bring signs of life and health back into the church — and that for the sake of the local and international mission fields each of their churches could reach.

I think of the three that one heart was won to stay. One-third is not a bad bating average. However, I wish more saints would learn to remain in tough situations, pursuing the glory of God through prayer, meekness, and faithfulness. I am not suggesting that anyone accept false doctrine, ongoing infighting, or sub-Gospel lifestyles. Yet I am saying that where churches are seeking to honor the Lord but have lost their way slightly, it is better not to abandon such assemblies.

I am grateful for the ministry of christianity.com. I was glad to meet some of the faithful staff at TGC13.

Related:  Gospel Departures , and Committing to One Another (@amazon).

What a challenge it is to attempt to capture D. A. Carson’s most significant exegetical and theological insights while he is speaking! He brings such a thorough perspective to almost every topic on which he speaks it is difficult to chose which insights should get the modifier, “most significant.” Instead, allow me to offer some commentary from his message, “Jesus’ Resolve to Head Toward Jerusalem” from Lk. 9:18-62, given at TGC13:

On Lk. 9:24: “Jesus uses extreme language because it is an extreme death.”

On Lk. 9:43-49: “[The disciples] could not get his death because they are having an argument about greatness rather than death… They are not clamoring to join him in his suffering… They want to be close to Jesus, but Jesus wants to see how [they] welcome a child, for then [they] are not showing off or brandishing [their] résumé[s]… They want to climb the corporate ladder and get rid of messianic competition” (with reference to the parallels in Mt. 20 and Mk. 10).

On Lk. 9:51-53: “Raw terror leads him to Jerusalem. But nothing will weaken his resolve to die on the Cross.”

I chose not to write down any notes from Carson’s lecture, “What Do We Mean When We Confess Jesus to be the Son of God?” since he recently published a book addressing the topic: Jesus the Son of God: A Christological Title Often Overlooked, Sometimes Misunderstood, and Currently Disputed (Crossway, 2012; Credo Magazine has a link to the audio of a lecture of the same title). Instead I simply listened and enjoyed Carson’s discussions concerning the convergence of the OT Messianic expectation with the NT / First Century sonship concepts.

Carson gave a great analogy on the difficulties faced by those translating the Scriptures for highly Muslim populated contexts – contexts where the idea of God having a “son” sounds like a blasphemous, divine-human copulation: The French Canadian equivalent of the English idiom, “I have a frog in my throat” is “I have [a] cat’s throat.” If you were translating the French into the English, would you use the English idiom, or something retaining “cat’s” if “cat” was a term with deeply invested theological meaning? A fuller discussion can be found in the book.

I am hoping that Crossway will compile the edited texts of the TGC13 expositions through Luke’s Gospel account. I will look for it in 2014. I also hope the Lord has willed from eternity past for Carson to produce a commentary on Luke.

(Link to Carson’s Jesus the Son of God at Amazon)

The Ascension, Typology of Christ's Ascension 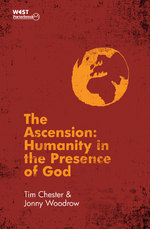 The good people at Christian Focus Publishers (CFP) kindly invited me to preview and endorse Tim Chester and Jonny Woodrow’s, The Ascension: Humanity in the Presence of God (96 pp.; also available through WTS Bookstore). Here is the endorsement (with my name misspelled on the Amazon page):

Tim Chester and Jonny Woodrow pull back the curtains of the true temple to disclose the glories of the ongoing work of the Savior on our behalf. They powerfully reveal the Ascension as fulfillment of what all of Redemptive History foreshadows—that the Lord’s own will enter his presence only through the work of the one who can go up into the very clouds of God Almighty.  Along the way the seasoned churchmen teach us how to read the two Testaments with great Biblical-theological insight. Meditation upon this exposition of Christ’s “going up” will strengthen all aspects of our private and corporate worship, prayer, evangelism, of public kingdom living and of Gospel preaching. Chester and Woodrow have given us a gift that will lift our eyes from this temporal horizon to the steppes of eternal joys of our High Priest in heaven.

From the book, please consider this passage on the question of the Ascension within the flow of Redemptive History:

Near where we live is the parish church of St Mary and St Martin in the village of Blyth, Nottinghamshire. Along the south side is a series of four stained-glass windows which date from around 1300. Each of the four windows consists of three pairs of stories. In each case the lower image is a story from the Old Testament while the image above depicts a New Testament story that fulfills the promise implicit in the Old Testament story. This is a medieval biblical theology in coloured glass.

Two panes relate to the ascension. One shows Mary Magdalene grasping hold of the Risen Christ with Jesus saying, ‘Do not hold on to me, for I have not yet ascended’ (John 20:17). The second shows the ascension itself. Which Old Testament stories would you choose to match these New Testament fulfillments?

In the windows of St Mary and St Martin’s the scene underneath Jesus saying to Mary, ‘Touch me not for I am not yet ascended’ is Abel’s acceptable sacrifice (Gen. 4:4) and underneath the ascension itself is a picture of Abraham meeting the priest-king Melchizedek (Gen. 14:18). As we shall see, the medieval craftsmen who made these windows rightly identified the ascension as the fulfillment of all that sacrifice and priesthood represented in the Old Testament. (13-14)

I will not give away the riches of the presentation.  I encourage you to get it and read it for yourself and those you serve.

I am grateful to have met Willie and Kate Mackenzie of CFP at TGC13.  I enjoyed my time of fellowship with them.

Piper says that we live in a time in which people do not live with safety in our (doctrinal) knowledge: “We know them like clouds and not mountains… Ask [believers] what they think and they tell you the cloud truth…. Luke is countering that.” Comments in sermon at Lk 1:1-4. 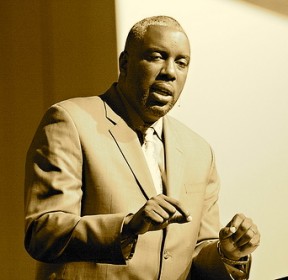 I was preparing a post to round up the links for entire discussion when Thabiti spared me the headache.  Thabiti and Doug have since added their own final words. 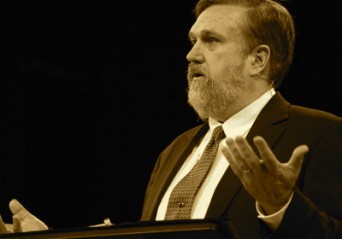 Doug is my brother in Christ, and I like him—as much as I can know him through his writing and speaking. I have been one of his followers for many years – at least for a year before Credenda Agenda published an extremely funny comment in response to Jerry Falwell’s gaffe over the Teletubby: Anyone who has seen even 60 seconds of Teletubbies is gay; (as best I can remember that was the line and I roared with laughter for a very long time after reading it). While Doug tends to use wit to make his point as well as does George Will (and Carl Trueman), he writes with great seriousness and I take his thoughts seriously. I have enjoyed his works on family, manhood, and marriage. I used his book on rhetoric as a required text the last time I taught homiletics. I have utilized his study guide to Calvin’s Institutes in personal study and hope to use it in ministry to the young adults at my current church. So I have no personal dislike of or grievance toward Doug, and I find him to be a tremendously gifted thinker and blessing to the body of Christ. 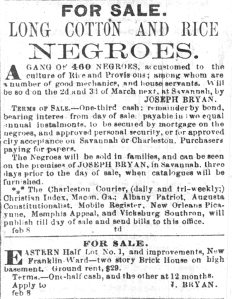 Yet I readily admit that something about his paleo-confederate views still strike a note of discord with me. However, I have not yet discerned the real point of my own concern: Could it be that Doug is not wrong in his conclusions? Or is it that the error is beyond the direction of the current discussion?

Back to Black and Tan it is, along with much more prayer, a rereading of all of the Anyabwile-Wilson discussions, and much more pondering over the Scriptures and our beliefs. Maybe the Lord will be kind and show us where we all have erred in our discussions on race and society.